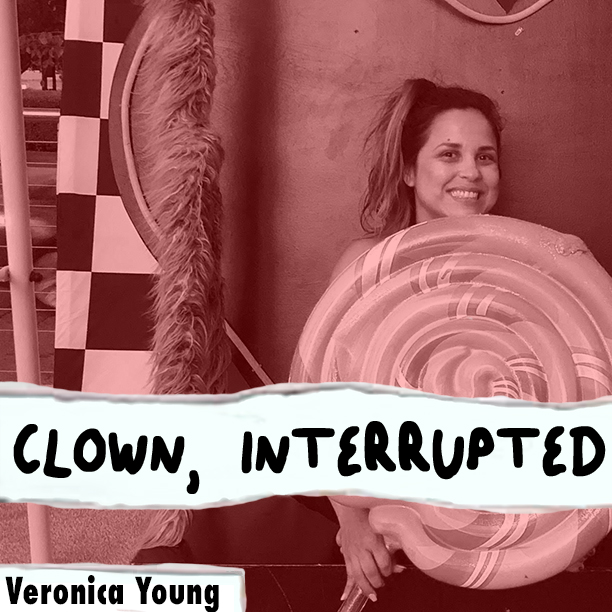 Welcome to the final episode of Clown, Interrupted with KiKi Maroon. I’ll explain in the closer why it’s the final episode, but first, let’s talk about today’s show. When I first started the podcast, I decided that a personal rule of mine would be not to have newly sober people as guests. Firstly, because the point of the show was to get advice from people who were more experienced than me on how to handle this new way of being. Secondly, it seemed dangerous. I remember how difficult my first year was; everything was so raw and confusing. I didn’t want to risk shaking up anyone’s fragile, or non existent, foundation for the sake of entertainment.

Well, I fucked up. Kind of. The Dallas Observer had an article called Straight Edge: Performers Explain How They Stay Sober While Working the Nightlife Scene. I got so excited that I reached out to the featured performers without doing research.

Podcast newbie mistake!!! I set up the session with today’s guest, Veronica Young, not knowing she was only 7 months sober. I struggled with whether or not I should cancel, but decided not to. Veronica (also known as “V”) was a party girl known for hosting and promoting concerts and standup shows around Dallas. She had a morning radio show called Hung Over with V where she and her guests talked about local music and current events, while day drinking to get over their hangovers.

And that is why I didn’t cancel on her.  She quit drinking, even though it was a huge part of her public persona. I know how difficult that can be, so I really wanted to talk with her about it.

Which is how, for the first time in Clown, Interrupted history, I was the one giving the guidance! We talk about being batshit crazy, going on the apology tour, her first sober gig, and a lot more. I hope you like it!